Have you ever had concerns about your own mental wellbeing, but felt too ashamed or embarrassed to tell anyone? Scared because a friend has been diagnosed with a mental illness? Do you think all mental illnesses are the same? Too afraid to tell your new partner that you have or have had a mental illness? Then you have been subjected to the stigma that accompanies mental illness! 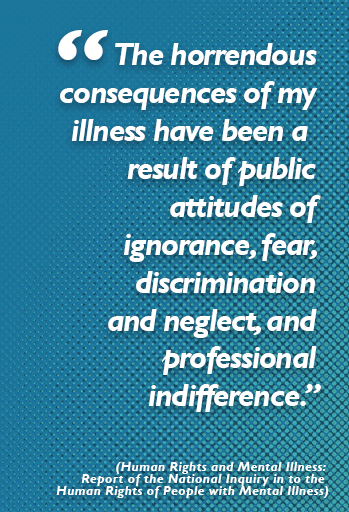 The word ‘stigma’ means a sign of shame or disgrace. Stigma is a mark placed upon you that can affect people’s view of you, and even your view of yourself, for the rest of your life.

There is a stigma associated with mental illness.

This means that along with having an illness, which can be difficult enough to cope with, stigma has an impact on relationships, self-esteem, socialising, going for a job or even renting a house.

There is a real history of prejudice, misunderstanding, confusion and mystery surrounding mental illness. It is a kind of prejudice which often begins with the application of a label, that distinguishes ‘normal’ or ‘well’ people from ‘sick’ or ‘abnormal’ people. Stigma can result in a person being denied full and equal social standing with another person. It takes many forms such as:

treating the person with an illness as the illness: e.g. thinking of a person as simply a ‘schizophrenic’ not as someone who has schizophrenia (along with a family, children, a job, hopes, dreams and a hobby or two)

The problem with stigma

You don’t have to have a mental illness to be affected by the stigma surrounding it. The myths and stereotypes surrounding mental illness can generate such fear and misunderstanding that people may find it extremely difficult to recognise that either they, or someone they know, needs help. Stigma can also prevent you from offering time, support or friendship to someone you know who is experiencing mental illness. Fear of someone’s illness can stop you understanding what it means to be mentally ill.

Stigma is demonstrated when people with a mental illness are seen as inherently violent, untrustworthy, worthless, intellectually disabled or unimportant. If you have a mental illness, you probably already know what it feels like to be treated with prejudice. You may have experienced it in the form of rejection from friends, neighbours, family, employers, real estate agents, financial institutions and society generally.

If you have a mental illness, you have probably internalised many of the myths surrounding mental illness without even knowing it. When you have been fed myths and stereotypes for long enough, it’s easy to begin to believe them. This internalised stigma, combined with the external discrimination you may experience, can make you feel rejected, lonely and depressed.

What can we do to challenge stigma?

The fact is that there are things we can do to challenge the stigma about mental illness, both individually and as a community.

The stigma surrounding mental illness has not occurred overnight. These stereotypes, myths and misconceptions take years to develop and will take time to eradicate, especially if we don’t think it affects us personally. There is, however, much we can do to actively challenge stigma, and everyone can play a role.