Buying a packet of mental wellbeing 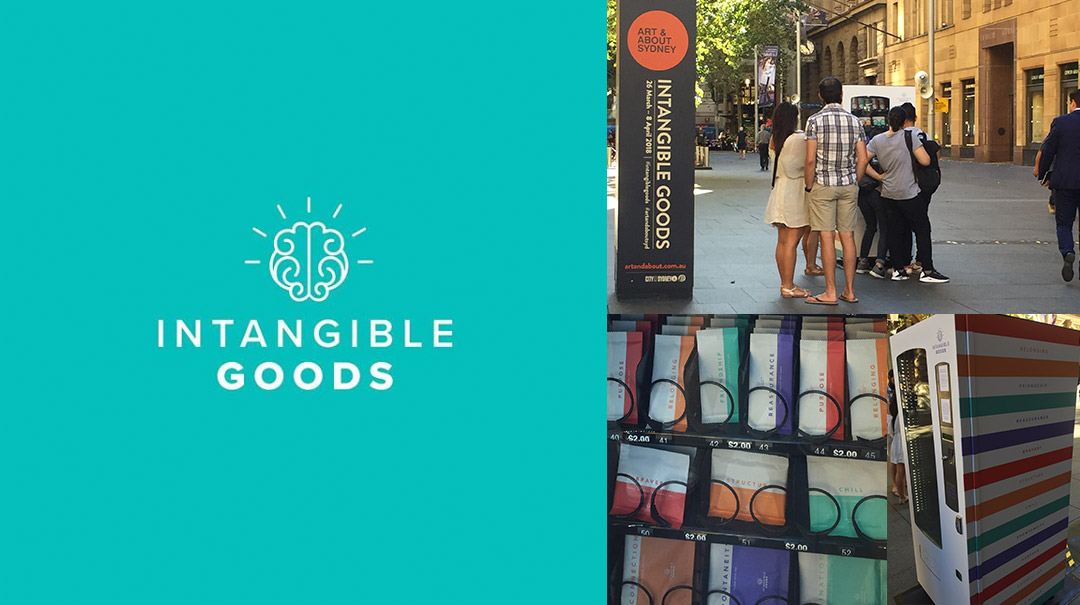 If you were wandering around the Sydney CBD in late March or early April, you might have spotted a vending machine, standing alone in the middle of Martin Place, Pitt Street Mall or even Customs House Square.

It looked a lot like an ordinary vending machine that sells chips, lollies and chocolates to hungry office workers or shoppers. If you had a chance to take a look, or even buy a package, you would have seen that the machine was selling something very different. Instead of being branded with “Smiths” or “Skittles”, the packaged read “Reassurance”, “Courage” and “Friendship”.

Welcome to the world of Intangible Goods.

Intangible Goods is the brainchild of advertising creatives, Mark Starmach and Elizabeth Commandeur, and was developed and exhibited with support from the City of Sydney’s Art and About public art program. It has been in the works for more than a year and finally came to fruition earlier this year in some of the most iconic places in Sydney’s CBD. We spoke to Mark when he dropped by the WayAhead offices to talk to us about the project.

“At the beginning, it was honestly just a bit of a creative release and a bit of a thought experiment. We have these things in our heads and in our minds that we need. What if they were actually available on a supermarket shelf?” said Mark, of the initial impetus for Intangible Goods.

“I think often mental health is perceived as something really heavy and confronting, especially stuff like mental illness, schizophrenia and all that sort of thing is really big and scary so [trying to] break it down, make it bitesize and snack-size, that sort of became the objective.”

The creatives were aware of the possibility of potentially reaching thousands of people so they worked with clinicians and the general public to develop each of their Intangible Goods. Mental health professionals Barbara LeBas, Dr Tim Sharp, and Charlotte Stapf worked closely with Mark and Liz to ensure that there was a solid grounding for the goods that they created. Mark and Liz also shared surveys with Sydney-based groups online to get feedback.

“We got over 500 responses from Sydneysiders but 600 responses overall…From that, certain needs simmered to the top and so it was a very clear hierarchy… right at the top, a need for greater sense of connection with others. Slightly below, there was a split between structure and spontaneity, which are at opposite ends of the spectrum, and then slightly below that was confidence…From those, Liz and I developed concepts for each of the products and then we just kept liaising with Barbara, Tim and Charlotte,” Mark said.

“[The first round of goods] were kind of like if I typed something into Google, I’d get that response. It was super broad and applied to everyone. The second round was completely the opposite. It was way too specific, it was like we kind of developed them for ourselves and then when we tested them on other people, it just didn’t resonate and didn’t work but then we kind of got there in the end.”

The project certainly did get there in the end, with thousands of Intangible Goods sold over the three weeks that the project was running. The stock often ran low or completely sold out by mid-afternoon. Feedback seemed to support the popularity of the packages with lots of positive stories reaching the creators through social media. Mark shared the story about a young dancer who got in touch after a performance.

“One girl was going to a ballet recital in the morning and then she was walking across Martin Place and she saw the machine and she saw “Reassurance”, which is what she needed,” he said.

“Reassurance is a card where you’re reminding yourself of your previous confidence when you’ve felt weak so it’s this little contract that you sign and put in your wallet. And so she took a picture of that and shared that with us and reached out to us, saying how it helped her get through the day and made her feel less nervous.”

We asked Mark why he thought the Intangible Goods had been so well-received and why it seemed to work.

“I think a lot of it is honesty. Just being honest with yourself and doing a bit of an audit and so I suppose, accidentally, the machine forced you to do that by thinking “What do I need?” and then it’s presenting you with all these things.”

The team at WayAhead really loved the concept too, with staff members visiting the Intangible Goods vending machine and sharing the packages with each other.

“We really love the concept behind Intangible Goods. It is such a simple, effective way of starting conversations and making little changes in our daily lives for better mental health. At WayAhead, we received a sample of each of the Intangible Goods and we really enjoyed opening them up, sharing them around the office and seeing how clever and insightful they were. Although the messages seem simple, each Intangible Good actually conveys complex, best-practice messages about better mental health and wellbeing,” said Marge Jackson, Senior Manager at WayAhead.

Proceeds from the sales of Intangible Goods were donated to several mental health organisations including WayAhead. . For Mark and Liz, raising funds for charity was always a part of the process. Their work in advertising has also been used to support other charities too, like Amnesty International Australia and Foodbank.

“We’ve done things in the past like that for charity, where you give something and it’s more than what you’d typically see, like a badge or a teddy bear or whatever it is. People engage with it,” said Mark.

Since the end of the project, a number of organisations, including workplaces, schools and community groups, have been in touch with the Liz and Mark to see if they could host the Intangible Goods vending machine.

“We’ve had some enquiries from a number of people, like businesses, who want to run it in their workplace…city councils also want to bring the machine out for local festivals and that sort of thing so there’s been a little bit of interest there. And medical conferences – that’s the other one – so mental health conferences, and so we’re working out how to do that,” said Mark.

“People have been asking if they can get their hands on the products without the vending machine, just send it online so we’re working out ways to make that happen.”